Skip to content
Isaiah 5:20 ESV Woe to those who call evil good and good evil, who put darkness for light and light for darkness, who put bitter for sweet and sweet for bitter! 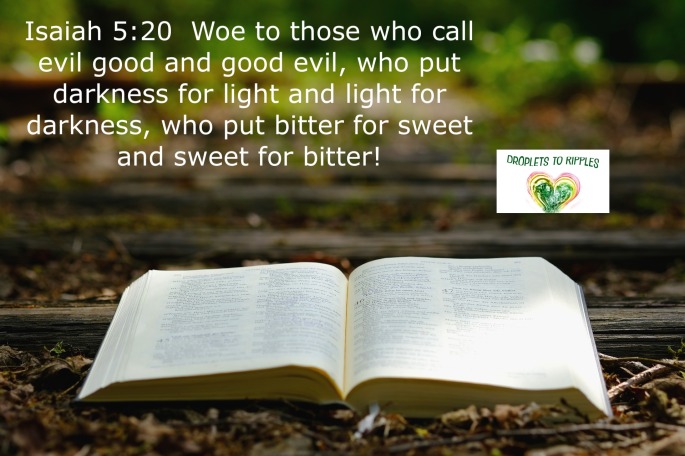 Do you know a Christian that you are pretty sure has twisted the truth about a situation and then used God’s word to make their situation look right? I have! Sad but true. I have seen past church members, friends and family members do it.  I have seen it happen more times than I wish I had.
This morning, my grand daughter got in trouble.  She played a prank on her brother and he nor her parents found the prank  to be funny.
Here is how it all went down…stay with me would you?
1) She made a conscious decision to play the prank.
Adult version: We make a decision to do something that is against someone else. As an adult it is not a prank , however, it is not received well. It could be not following instructions from our boss, trying to get someone in trouble, take someone else’s job, talking bad about someone, under-minding another persons authority. You get what I am saying?
2)When her brother told on her she made excuses about how it was not wrong.
Adult version: We justify why it is ok to do something wrong to someone else. We know that we are suppose to love others as we love ourselves. We know that the bible says if we have a problem with someone else we are to go to them but we don’t. We talk about them, we find fault about them at every turn, and after awhile, because we have not followed God’s instructions on how to handle our sin, it consume us without us even seeing it happen.
3)She tried to get other to agree that what she did was really not that bad.
Adult version: I have seen this happen over and over again, at work, at church, and in families. I think it is our nature to want others to validate how we feel. We sin again by gossiping with one side of the story. Some friends will fall prey to this and sides are taken without ever hearing the rest of the story. Why aren’t the Christians hearing the story, telling the other Christians to go to their brother or sister and fix the issue instead of jumping on the bandwagon and taking sides???? SIN. We would rather be their friends instead of giving/following biblical advise.
4)She became mad because she got in trouble.
Adult version: The person has sinned against their brother/sister. They have made excuses why it was ok. (the other person started it) They have gotten others into their camp and now they are mad at those who have pointed out their wrongs and not jumped on their bandwagon.
5)She refused to admit fault, refused to apologize and could not believe she was being punished. PRIDE.
Adult Version: Proverbs 16:18 Pride goes before destruction, and a haughty spirit before a fall. If you left a person or situation angry, you are at fault. Maybe you did not forgive, did not accept your part in the drama, maybe you have a jealous spirit or you envy that person and what they have or do, think more highly of yourself than you should (I can do it better etc).
As I watched this all play out today I was reminded of many situations that I had experienced in my own life where the scenario was so familiar except it was adults. In the wake of these scenario’s there was damage, relationships destroyed, people led astray, sin embedded deep in peoples hearts, and churches and it’s members hurt from the actions of Christians who did not handle a situation God’s way.
If a person uses scripture to get you to do something wrong they are deceiving you.  If they ask you to say anything against another Christian, cause you to hurt another Christian, ask you to follow them, to leave a church/family, hurt a church or pastor (God chooses his shepherds and He will take care of them, the good and the bad.), then you are being led astray. God wants you to, ask for forgiveness, forgive and restore your relationship with others believers.  He even tells us to stop praying and go make things right with another brother/sister. They should not be talking to you about their problem with someone else, they should be talking to the Lord and the person they have a problem with. I don’t care how much scripture they use to justify themselves these things are wrong.
It is not too late. Go restore a broken relationship today. Stop following man and follow God. Follow His words on how to handle any and every situation you face and you will be blessed. Go be blessed.
Advertisement
Join 153 other subscribers