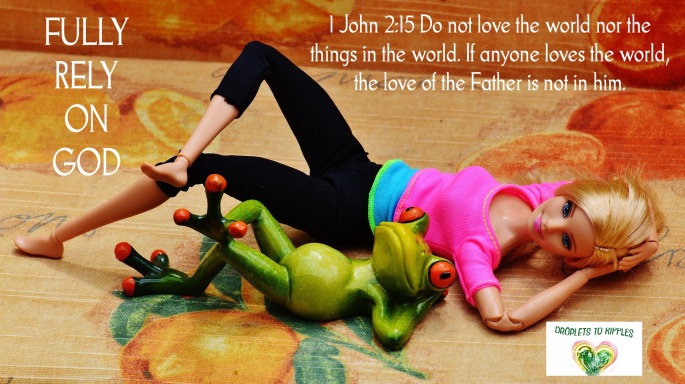 1 John 2:15 Do not love the world nor the things in the world. If anyone loves the world, the love of the Father is not in him.

I recently watched a new Hulu documentary called “Tiny Shoulders: Rethinking Barbie.” Here is a quick overview of the movie:  Over the years Mattel had seen a decline in Barbie sales. The design team discuss how the slim and trim Barbie of yesterday was no longer relevant and was in need of a body make-over. In most of the video the team struggles as they design the new plumper, shorter, taller and blacker barbies that will launch in January of 2016.  They believe this change will be the answer to increasing Barbies sales.

I immediately thought about today’s focus scripture and the following scriptures as well.

1 John 2:15 Do not love the world nor the things in the world. If anyone loves the world, the love of the Father is not in him.

Romans 12:2 And do not be conformed to this world, but be transformed by the renewing of your mind, so that you may prove what the will of God is, that which is good and acceptable and perfect.

And lastly, Genesis1:31 And God saw that everything that He had made, and behold it was very good.

I grew up playing with Barbies and so did my daughter.  Barbie did not make me or my daughter feel bad about ourselves.  As a matter of fact we are both very confident women.  To me, Barbie was a doll and nothing more.  Barbie was the next step up for a little girl when she was too old to play with baby dolls, so it was sign of growing up.

As I listened to the documentary I could not believe how people thought a small doll like Barbie was causing so much identity trauma in our young girls.  Just this weekend, my grand daughter was telling me and her grandfather about a girl in her 4th grade class who had changed her name to a boys name, wore boy clothes and was taking hormone shots to become a boy.  Earlier in the day, I had watched two tv shows, both which had men kissing men and women kissing women.  BUT Barbie is causing issues right??!!

The Scriptures says that we are “fearfully and wonderfully made” (Psalm 139:14). Our children need to realize that God created billions of individuals yet gave each one his or her own look, strengths, personality and potential. We can live in confidence that God doesn’t make junk and that every one of us is a unique masterpiece of His creative genius.  Not everyone is going to believe this way.  As Christians we do.  It is our responsibility to insure we teach our christian children to believe this as well.  I have always heard a quote, “If you don’t stand for something you will fall for anything.”

My personal opinion, is that our young people do have a lot of identity trauma they are dealing with it, however, it is not coming from a small doll called Barbie.  It is coming from a world and people who were once perfect and now are not.  If we want our little children to be all that God created them to be, we must tell them over and over again about God and His plan for them.  Read Deuteronomy 11:18-19.  We have to be in the world to provide hope and encouragement but not of the world.  We are just ambassadors here for a short while.